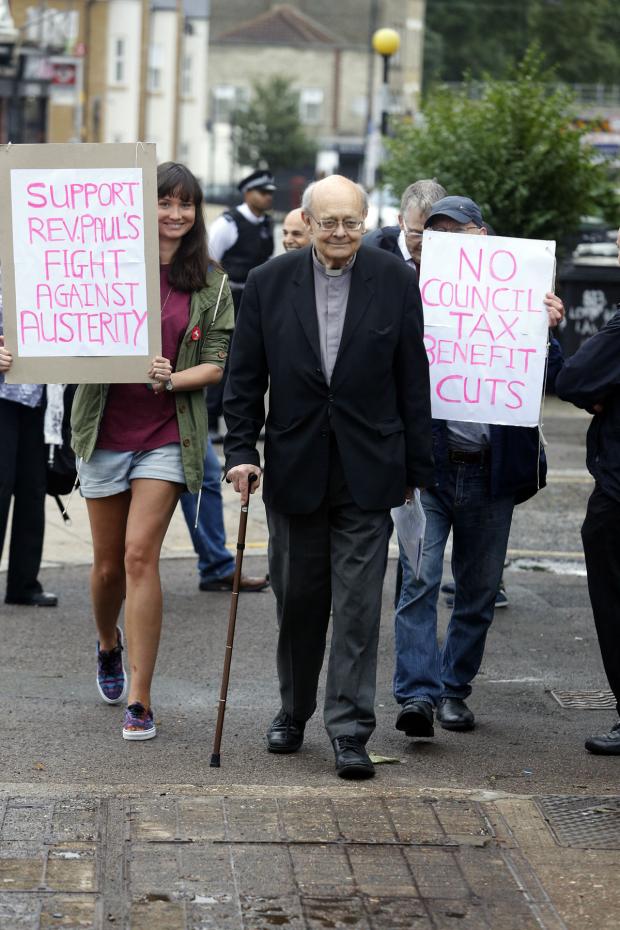 A vicar who refused to pay council tax in protest against benefit cuts spoke from the dock to appeal for leniency for those who cannot pay.

The Reverend Paul Nicolson asked magistrates to reduce costs for benefit claimants taken to court for failing to pay their council tax.

Appearing at Enfield and Haringey Magistrates Court this morning, he told the magistrates that liability costs of £125 are unreasonably high and should be reduced not only for himself but for others who could not pay council tax because of cuts to benefits.

Rev Nicolson said: “I am asking the magistrates to reduce the cost of £125 for a liability not only for me, but for every application from the London Borough of Haringey.

“That amount is unreasonably high when the cost of producing a liability order was £3 in 2009, according to a parliamentary question.

“It is particularly disproportionate for the 740 households in the borough coping with the £500 overall benefit cap, 80 per cent of whom are single mothers.”

“These mothers are struggling to pay their rent, let alone court costs.”

During the hearing, the 80-year-old asked a representative of Haringey Borough Council how the sum of £125 had been decided, and a breakdown of the where the money would go.

“What is the reason for the difference when benefits people receive are the same across the UK?”

The council representative explained the £125 sum was agreed between the court and the council in March 2010 and is consistent with other London Boroughs.

After arguments from both the authority and Rev Nicolson were heard, the magistrates ruled in favour of the council and issued the £125 liability order again the clergyman.

Chairman of the bench Freddy Lawson said the 80-year-old could use the time to represent himself and not anyone else.

He said: “We have heard your representation about the issues in general. We can only make a decision on your case individually.

“As you have said, you have the means to pay the costs. We have approved the £125 liability order.”

Rev Nicolson later said he would appeal against the decision.

I was also on the Sunday programme on BBC Radio 4 on the 4th August.

With Political Will, There is a Way - our June update