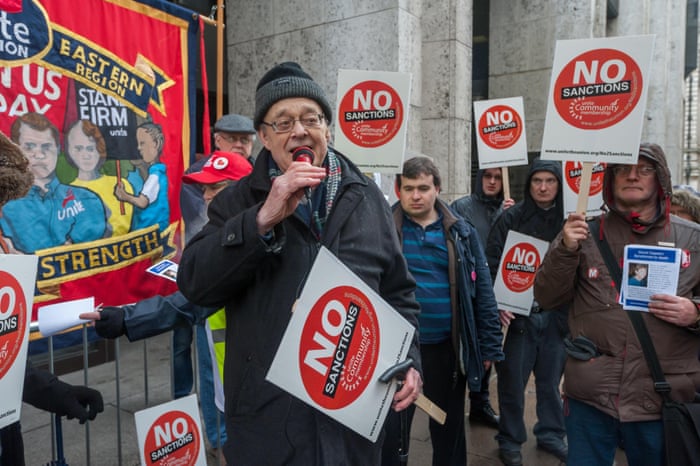 Photograph Martin Goodwin for The Guardian

The excellent article by Amelia Gentleman tells my reasons for undertaking civil disobedience.

It also arises out of exasperation from working, during and since the poll tax, with and for people who cannot pay their council tax arrears, rent arrears, TV license, court costs, bailiffs fees and simultaneously buy a healthy diet, cook it, keep them or their children warm, buy clothes, transport and other necessities. The predatory lenders are always on the door step making bad situations worse.

I have taken on the magistrates, local authorities and job-centres with and for individuals and families under the very great stress of debt created by bad laws and inadequate incomes. I have lobbied parliament as the Bills on so called welfare reform are whipped through the votes of MPs and Peers disregarding the robust evidence from the universities of poverty/debt related mental and physical illness, low birth-weight and shortened lives.

Haringey council's response to my refusal to pay their council tax will not do. They say;

“Haringey has a duty to collect council tax, which is spent on vital services such as care for older residents, street cleaning and libraries. It is only fair to those who pay their council tax that we take steps to recover funds from those who refuse to pay.”

Since April 2013 Haringey councillors have asked the poorest residents in both work and unemployment to pay a council tax for those vital services, for which their benefits were never intended. The council then enforces the tax so adding court costs and bailiffs fees.

Meanwhile all the political parties vie to lift the largest number of low income people out of income tax.

In 2012, when Haringey councillors were deciding how to recover the 10% reduction in central government funding of council tax benefit (CTB), they had the choice between taking £2 - £8 a week out of the benefits of both employed and unemployed, so abolishing their 100% CTB from April 2013, or adding 86 pence a week to council tax to maintain the 100% CTB.

Councillors were aware of the impact on mental and physical health of debt and of the increase in the rents that would have to be paid by residents out of the same benefits, also from April 2013, as a result of the Welfare Reform Act 2012, and of the impact of benefit sanctions.

The unfairness of their decision was admirably summed up in the Supreme Court judgement in Moseley v Haringey (see paras 22 & 29) which found unlawful Haringey's 2012 consultation about taxing the poorest residents.

"Those whom Haringey was consulting were the most economically disadvantaged of its residents. Their income was already at a basic level and the effect of Haringey’s proposed scheme would be to reduce it even below that level and thus in all likelihood to cause real hardship, while sparing its more prosperous residents from making any contribution to the shortfall in government funding”.

I have been summoned to Tottenham Magistrates Court, Lordship Lane, N17 6RT for non-payment of council tax on Wednesday 15th June at 10 am.

How compassion can transform our politics, economy and society